Rise of the driverless car: are your students prepared? 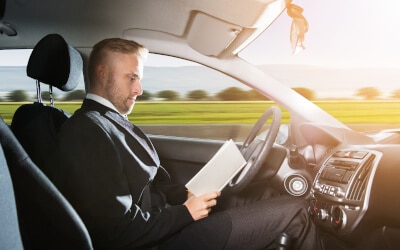 In the last decade, one of the big talking points in the car industry has been the rise of “driverless” cars with manufacturers including Volvo, Nissan, Mercedes and Renault all showing off concept cars and promising more and more autonomous vehicle features. Are your students prepared for a world where they could be sharing a road with cars that would make better decisions than themselves?

The different levels of autonomy

The term “driverless” cars currently cover a broad range of definitions as manufacturers work at different levels of autonomy. The Society of Automotive Engineering came up with 5 “levels” of autonomous vehicle which is the generally accepted definition.

Level 0 Automation – This is your everyday car with no autonomous features at all – the driver is in full control of steering, braking, accelerating, parking, reversing etc.

Level 1 Automation – This level is known as “Driver Assistance” and there are already some vehicles on the road today with this level of automation. This is where the driver still maintains control but has various features to assist them, such as adaptive cruise control to maintain a safe gap from the vehicle in front, lane assist etc.

Level 2 Partial Automation – This level is currently being developed where the vehicle can assist with steering or acceleration functions but the driver must be ready to take control of the vehicle and is still responsible for most safety critical and environmental monitoring.

Level 3 – Conditional Automation – This level of automation is the biggest leap from the previous three levels which is where the vehicle begins to monitor the environment using sensors such as LiDAR and the vehicle begins to take over from the driver. The driver’s attention is still critical at this level but functions like braking can be left entirely to the technology.

Surprisingly, some manufacturers such as Audi have already created vehicles with this level of autonomy 2 years ago but they were unable to launch in the UK due to Regulation 104 of the Road Vehicles (Construction and Use) Regulations 1986, which states: “No person shall drive or cause or permit any other person to drive, a motor vehicle on a road if he is in such a position that he cannot have proper control of the vehicle or have a full view of the road and traffic ahead.” Audi did announce plans to launch the car in the UK last year but at the moment legislation is yet to catch up.

Level 4 – High Automation – At this level, the vehicle is capable of much of the steering, braking, accelerating, monitoring the road and responding to situations, on its own. At this point the autonomous driving system would alert the driver when it is safe to switch the vehicle into this mode though the technology still struggles with dynamic driving situations such as traffic jams or merging in the road.

Level 5 – Full Automation – It is believed these cars won’t have steering wheels or acceleration and braking pedals. They will be free from geofencing and the driver simply inputs the destination and leaves the system to go. (Geofencing is a GPS system limiting the movement of Level 5 autonomous vehicles to certain areas).

This technological advancement is very exciting and could possibly make our roads much safer, especially as it is estimated that 96% of all traffic incidents are attributed to some form of human error.

However, are you preparing your students to the reality they could be sharing the road with more advanced vehicles? Also, these vehicles could make faster and better decisions than they could? The main issue with this technology at the moment is its ability to predict the unpredictable factors i.e. us, but if our students will be sharing the roads with these types of cars, have we taught them that we will need to change our driving attitudes in order to be safer for autonomous vehicles? Is it even possible that a child born in 2020 may never need to drive? Only time will tell.

4Wheelz is a driving school operating as franchises throughout the West Midlands. If you would like to become a driving instructor, then you can find out more about our excellent training program here. Alternatively, if you would like to join us as an instructor from another driving school (or maybe you were operating independently) then click here to find out more about our franchise.