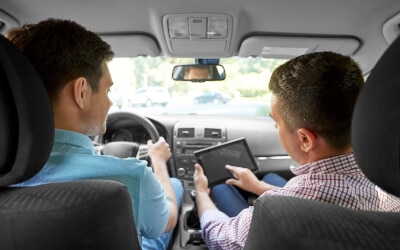 First of all, the examiner will be marking the pupil on an iPad, rather than the paper-based system used previously. This means once the test is completed and if it results in a pass, the details can be sent to the DVLA instantly and a new licence can be posted much faster than the 3 weeks previously.

There have also been some structural changes to the test as follows. After the examiner calls the candidates name, they will be asked to click two boxes on the iPad to accept the insurance and residency declaration and then sign as before. However, the pupil will now be asked for their email address to send the report to once the test has been completed.

The test then continues as normal with the eyesight test, tell me question and setting off – however for a fault to be recorded the examiner holds the stylus on the required box for a short period of time to record it and at the top of the sheet are orange and red boxes to mark serious and dangerous faults.

The report which is emailed will contain all of the faults with Dangerous at the top, then Serious then the other errors, usually in the order in which they happened.

It is also worth noting if any of your students are in the process of moving house, perhaps to go to university that if they are changing at the time of the test the examiner cannot change their address but will advise them to apply to DVLA to gain their full licence and change of address.

4Wheelz is a driving school operating as franchises throughout the West Midlands. If you would like to become a driving instructor, then you can find out more about our excellent training program here. Alternatively, if you would like to join us as an instructor from another driving school (or maybe you were operating independently) then click here to find out more about our franchise.