I was hit by an uninsured driver – what should I do? 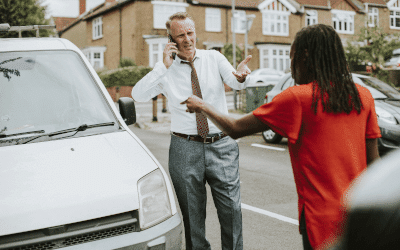 Driving without third party liability insurance is a criminal offence. Yet in 2019, nearly 90,000 drivers were caught driving without insurance in the UK. This number must be the tip of the iceberg; the Motor Insurers’ Bureau estimates that there are over 1m uninsured drivers (4% of all drivers).

What to do immediately after an accident

If you are injured in a road accident, your first priority must always be to get to safety if possible and then assess the need for medical attention. Check yourself and your passengers for injuries. If necessary, or if there is any doubt at all, call an ambulance.

If possible, you should then:

What if the driver does not stop or is uninsured?

If the other driver says they are not insured, or flees the scene of the accident, the police will investigate. If the police are unable to trace the driver or they confirm that the driver is uninsured, they will notify you.

If you were injured, or your car or other property has been damaged, you could make a claim through your own insurance – assuming you have fully comprehensive cover.

However, unless your policy includes a clause for accidents caused by uninsured drivers, claiming through your own insurance will likely affect your no-claims discount. It will also hike your premium, especially if you are a recently-qualified driver.

Thankfully, there is an alternative in the form of the MIB.

The MIB is a not for profit organisation that compensates victims of uninsured and untraceable drivers through a central fund.

Established in 1946, the MIB is funded directly by the car insurance industry through motor insurance premiums. In accordance with the Road Traffic Act 1988, all UK motor insurers must contribute. It is estimated that funding the MIB adds between £20 and £30 to the average motor premium.

When considering that the MIB handles around 26,000 injuries involving uninsured or hit and run drivers every year, few would question the value of the safety net provided by the MIB.

The MIB will pay compensation for injuries as well as vehicle and personal property damage.

If you have been involved in an accident with an uninsured or untraceable driver, the MIB will consider your claim if you meet the following criteria:

The MIB processes claim applications from all road users including car drivers, motorcyclists, cyclists and pedestrians.

They will also consider claims from UK citizens involved in accidents with a foreign-registered vehicles – either in the UK or within the EU. However, claims against foreign drivers may no longer be possible once the Brexit transition period ends.

Can I claim as a passenger?

If you were aware that the driver was intoxicated or under the influence of drugs, you also cannot claim through the MIB.

Is there a downside to claiming through the MIB?

In the past, some claims have taken substantially longer to settle through the MIB than through an insurer. However, the MIB now state that they will endeavour to reach a decision within 3 months. For lower value claims this period can be less than six weeks.

You may need the money sooner for medical treatment or to get your car back on the road. If you need money to fund treatment or other costs immediately, the MIB may consider an interim payment.

How do I start a claim through the MIB?

All claims must be submitted online. The online forms are dynamic and they walk you through the process. You will need to grant access to your medical records and provide any evidence you have in support of your claim, such as photos of the accident scene.

Once an application form has been submitted, the MIB will start to investigate. They will contact all relevant parties including the DVLA, the police, your insurance company and any witnesses.

There is no need to appoint a solicitor and most people choose not to. If you are a minor or are unable to handle a claim due to injury, a solicitor can act on your behalf.

How do the MIB reach a decision?

If the MIB decides that the other road user was responsible for the accident, you will receive compensation.

It may be that both you and the other driver were each partly responsible. In these cases they may reach a finding of ‘contributory negligence’ and your compensation would be adjusted to the extent that you were to blame.

If the MIB decides that you were responsible for the accident, you would not be compensated. However, you would have the right of appeal.

General damages compensation is paid for any pain, suffering and loss of amenity you have suffered. Special damages will be paid for any costs and losses you have incurred. You can use an online calculator to estimate the amount of damages you would receive.