Dashboard Warning Lights – Do You Know What They Mean?

We carried out a nationwide survey in order to find out about the level of knowledge of the UK’s road users. One section of our survey tested driver’s knowledge of dashboard warning lights and the results were very interesting – turns out these lights aren’t as self explanatory as they’re meant to be…

Participants were first asked which light was the oil light which looks as follows: 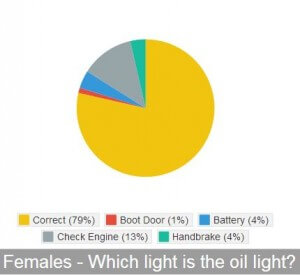 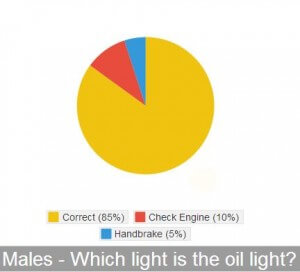 In terms of age groups, the most clued-up group were 46+, with 86% of this age bracket correctly answering the question. The worst performing age group was 26-35, beaten by new drivers in the 17-25 age group, 71% and 74% being the respective percentages of correct answers in each age group.

Participants next question asked them to name the fog light warning:

97% of both females and males  answered correctly here. Worryingly however, 2% of males thought that the oil light represented your fog lights being on and some also confused the ‘boot door open’ light for the fog lights also. The only wrong answer among females was the handbrake light which, considering it is a exclamation mark warning light, is slightly more logical than what the incorrect men believed. 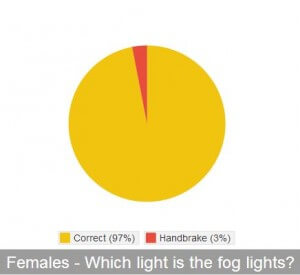 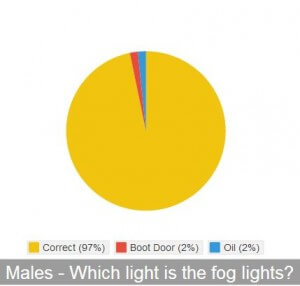 Question 3 asked people to identify the handbrake light which, as just mentioned, looks like this:

91% of women got this one right while only 86% of men did likewise. 7% of men thought the ABS light signified the handbrake warning – ABS at least having something to do with the braking system. 4% of females also made the same mistake while another 4% confused the ‘boot open’ light for the handbrake. 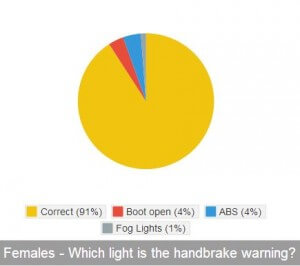 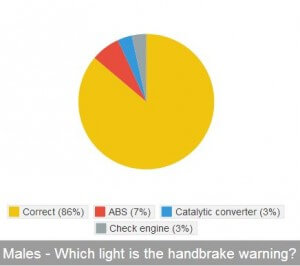 In terms of age breakdown, each age group was fairly evenly matched. 36-45 year olds were the best performing with 88% of them being correct. 17-25s came a respectable second place with 85% getting the right answer.

The final question was perhaps the most difficult. Those surveyed were asked to name this light – the ‘engine warning’ light:

65% of males got this one right while only 47% of females did likewise. The second most popular answers among both sexes was the catalytic converter warning light; 23% of men and 36% of women answered with that. 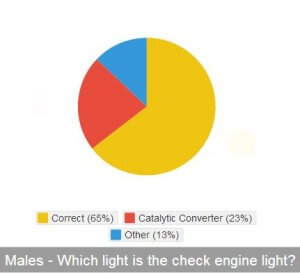 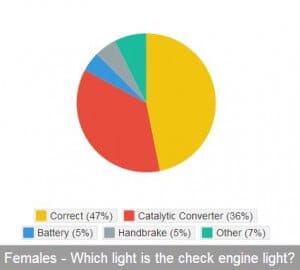 The least knowledgeable age group on this question were the 26-35s with only 43% of them getting this one right. 63% of people aged 36-45 were correct and they were the best performing age group. This question clearly proved too tricky for many of the survey participants which is why we feel many would benefit from a quick guide to the most important dashboard warning lights.

Oil – This light illuminates when the ignition is switched on but should almost instantly switch off the engine has started. If the light stays on or turns on mid-journey, stop as soon as is safe to do so and check your oil level. Top up if the level is low.

Handbrake (Braking system warning light) – While the handbrake is engaged, this light will be illuminated. If the light is still illuminated once the handbrake has been taken off, this might suggest that the level of brake fluid is low. You should regularly check your brake fluid because, as your brakes start to wear, the fluid level will slowly drop. Check your manual for the correct fluid type.

If it flashes when driving, reduce your speed until it illuminates constantly. If it continues to flash, try not to accelerate heavily and seek assistance as soon as possible. The vehicle is still safe to drive when this light is illuminated as long as there are no other clear faults with the engine.

ABS- This light illuminates when the ignition is switched on to show that the system is operational but, if showing when the engine has started, this indicates a malfunction. Have this checked as soon as possible as while some cars will are safe to drive without ABS, others are not so, at the very least, check the handbook for advice.

Immediately move your vehicle to a safe spot and seek assistance as there is potential to cause serious engine damage, especially if the drive belt is broken.