Battle of the sexes: who comes out on top in our survey results?

Our recent survey tested drivers’ knowledge of the rules of the road and we’ve already explored how most people navigate their dashboards, as well as taking a look into the common misconceptions of the Highway Code. In this post, we look at how the survey results compare when divided by gender in the battle of the sexes.

It was close, with both men and women outperforming each other in certain areas of the survey. So where were the strengths and weaknesses?

Men were more clued up about drinking and driving – it’s legal to do so and 19% of men got this right, whereas only 4% of women knew that you could do this. More men also knew that it wasn’t illegal for passengers to drink, with 75% getting it right, as apposed to only 67% of women.

It’s an area that tripped everyone up: unlike the USA, which has a zero-tolerance rule against alcohol, the UK allows drivers to have 35mg of alcohol per 100ml of breath – in fact, you can actually drink while driving!

How much 35mg equates to in terms of pints or glasses depends on a number of factors including the type of drink, your age, weight and even gender. However, it’s advised that you avoid drinking at all as a precautionary measure. If you are caught in the act of drinking behind the wheel, the police will most likely pull you over regardless of whether you’re intoxicated – something that you would most likely want to avoid.

Animals on the road 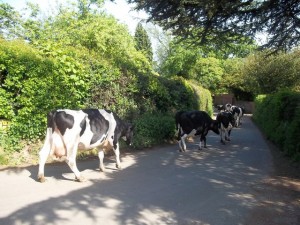 Elsewhere in the survey, women fared better on animal-related questions, with 75% saying that if a rabbit ran out in front of their car they would slow down, if safe to do so, to avoid it. Only 67% of men chose this option.

In addition to this, overall more women would get in contact with the police if they had injured an animal. Four percent said they would phone the police about the rabbit if they hadn’t managed to avoid it, while one fifth would get in contact with the authorities if they had injured a cat. It should be noted that you don’t need to contact the police about harming either of these animals, but you should call them if you injure any of the following: dog, goat, horse, cattle, ass, mule, sheep or pig.

In the survey results, women were more clued up about health than men, and when asked, “Can a driver be prosecuted if they cause an accident as a result of sudden illness like a stroke or heart attack?” 81% answered “no” correctly, as opposed to 68% of men. Even though a driver cannot be prosecuted as a result of their driving while ill, they may be required to pay compensation.

Women were perhaps a little more sympathetic, with 67% believing that you must stop at the site of a road accident if you are the first person to witness it.

Only 52% of men thought this were the case. It’s not required by law to stop if you witness an accident, however you have a moral obligation to at least call the emergency services.

Overall, the battle of the sexes was a close one, and it doesn’t look like it will be fully resolved this time around, with both men and women keeping each other on their toes.